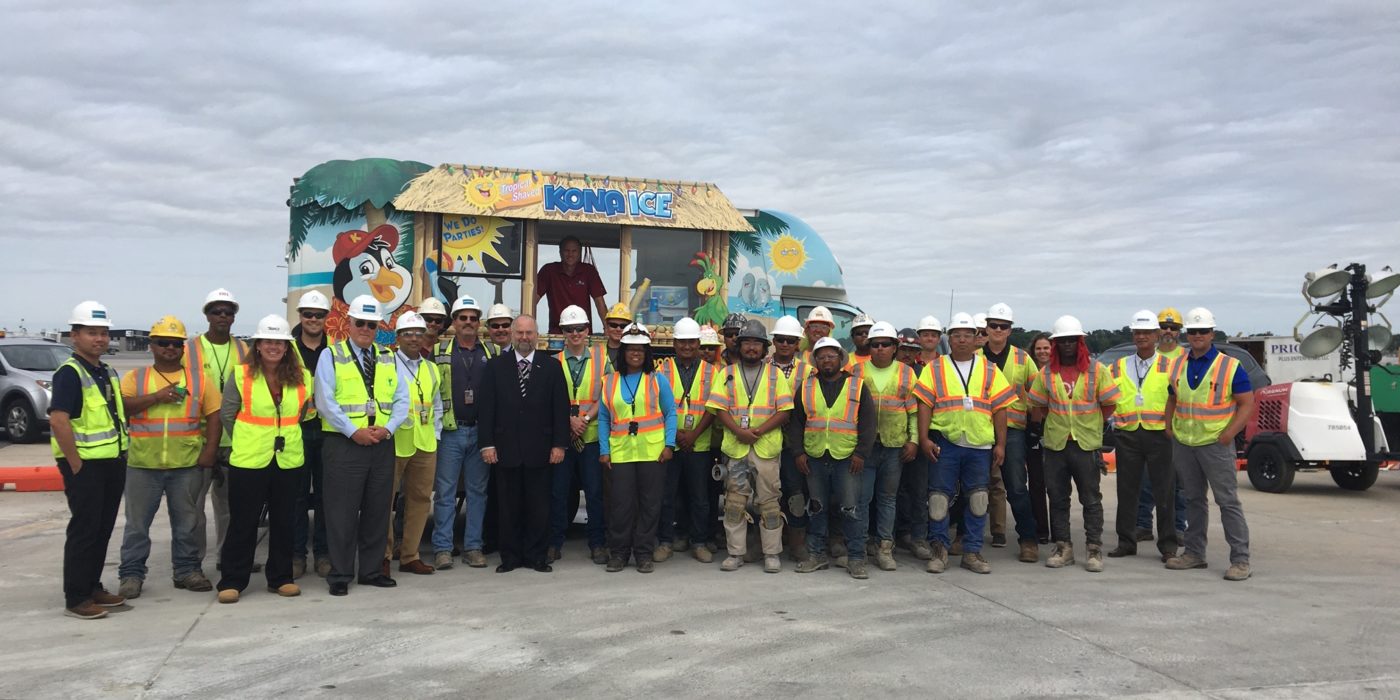 Having experienced success using Construction Partnering strategies on a prior challenging aviation project together, the team on the Baltimore/ Washington International Thurgood Marshall Airport (BWI Marshall) Airport Taxiway B Reconstruction Project was already ahead of the game when they embarked upon their new endeavor together. Learning Partnering strategies to create a high-functioning team on their previous BWI Marshall project, all stakeholders were confident they could tackle any new challenges coming their way by following a similar strategy.

Furthermore, because of their positive initial Partnering experience, the Maryland Department of Transportation Maryland Aviation Administration (MDOT MAA) began requiring Partnering through a neutral third-party facilitator on all of its construction projects over $10 million. With the $10.3-million Taxiway B Reconstruction Project fitting into this budget category, the team felt even more confident they were on a path to success.

The 1,350-foot-long taxiway Taxiway B Reconstruction project was critical to the airport’s ongoing operations, so it was imperative to ensure it was conducted in an efficient manner to meet quality, schedule and budget expectations, without impacting operations and passenger travel. Because Taxiway B serves as the primary access from the north cargo apron and international areas of the terminal to the airfield thus experiences traffic from some of the heaviest aircraft traveling through the airport, this was no small feat.

Further complicating matters from the get-go, the Maryland Department of Transportation Maryland Aviation Administration (MDOT MAA) needed to secure an Airport Improvement Program (AIP) grant from the FAA to fund it. The design and program management teams worked diligently to meet the FAA deadline and secure the grant. A contract duration of 260 days was specified to complete the reconstruction, but before construction on Taxiway B could commence, work on a parallel taxiway was required to detour aircraft during construction. In addition, several airline and gate relocations were required to provide a safe construction site and ensure uninterrupted operations for the three carriers impacted.

To ensure a successful project capable of overcoming considerable challenges, the project’s prime contractor Allan Myers hired Neal Flesner as the partnering facilitator for the project. There was a total of eight facilitated partnering meetings, including four with the entire project team and four with the executive team which were facilitated by Eileen Sien from Airport Design Consultants, Inc. (ADCI), the project’s program manager. The four larger group sessions were held quarterly, including a kick-off in February 2019 and a closeout, lessons-learned session in October 2019.

During the initial Partnering session conducted by Flesner, clear expectations were established regarding the project’s schedule, phasing, airline impacts, and stakeholder communication. The team worked together from the start to maximize efficiency by identifying product substitutions, proposing phasing modifications, and coordinating with all stakeholders to ensure smooth transitions between construction phases. Requests for Information (RFIs) and product submittals were returned expediently, and issues were often discussed and resolved in meetings or the field before a confirming RFI was written.

Another Successful Project
Confirming they made a wise choice to utilize Partnering strategies on yet another project, Paul Shank, MDOT MAA Chief Engineer said: “The dedication and exceptional teamwork displayed by the team was paramount to the success of the project. The team, who had worked together previously on projects, leveraged deep working relationships to ensure the project moved smoothly.”
Resulting from their concerted partnering effort, the project came in $1.17-million under budget and all work was substantially completed 31 days ahead of the contract completion date. Furthermore, the team achieved a remarkable zero-recordable safety incidents with 25,000 work-hours, produced a high-quality product, and further solidified their partnerships with all team members.
The project team’s exceptional Partnering effort was also recognized by the International Partnering Institute (IPI) during its 2020 IPI Industry Awards where project team members were honored with the Diamond Level 2020 IPI Partnered Project of the Year Award. In June 2021, BWI went on to receive IPI’s highest honor—IPI Partnering Champion.

Congratulations to all stakeholders on this exceptional Partnered project!